Should I invest in IT?

Regular readers of Investing Insights know we are passionate about technology. A client recently asked ‘Should I invest in IT?’

In Western consumer technology, there are five big IT companies that touch upon nearly everything we do in technology. They are all massive, listed companies in the US and they are Apple, Alphabet (Google), Microsoft, Amazon and Facebook

To better help you understand how these companies make their money, Business Insider created this great graph which we reproduce below: 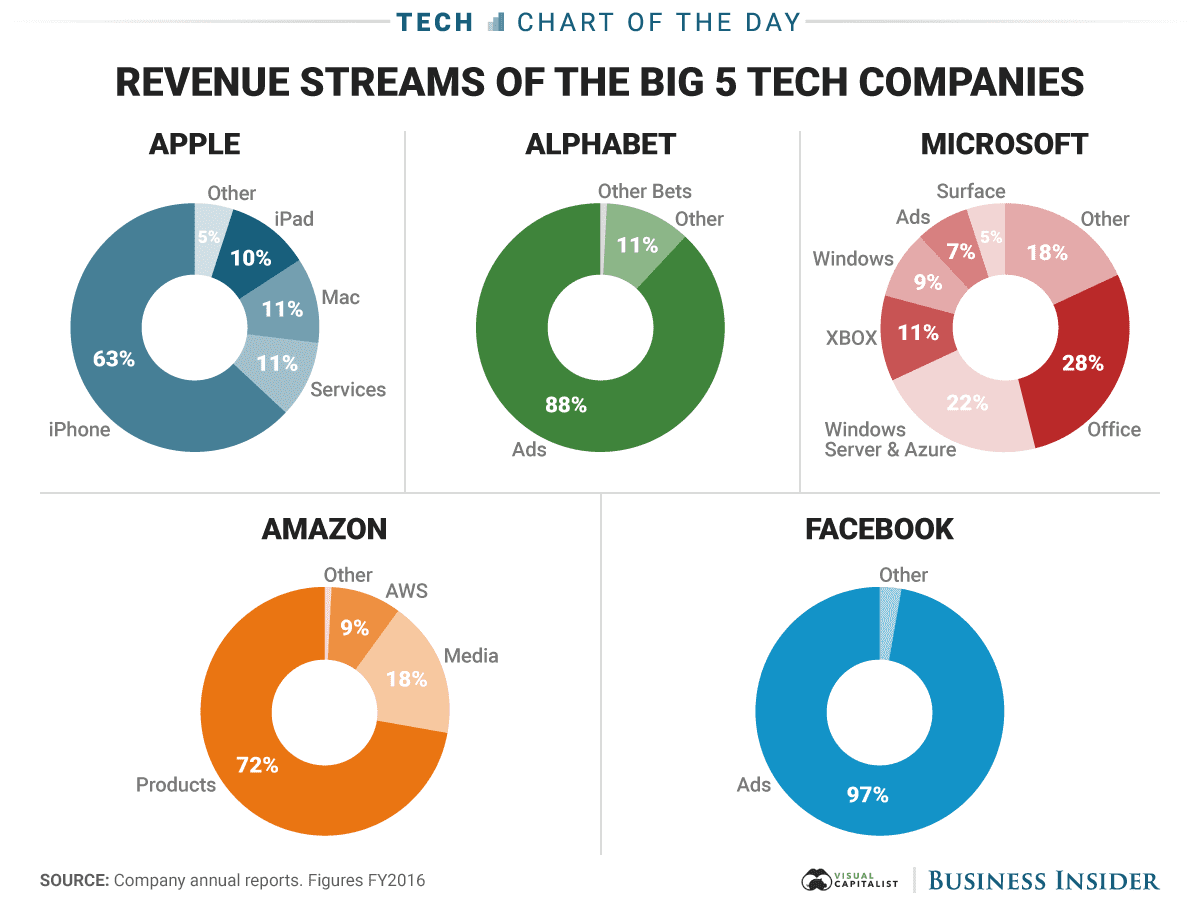 Interestingly, Apple’s revenues are dominated by manufacturing equipment (especially the iPhone); Amazon by its distribution business (soon to come to Australia); Google & Facebook’s revenues by ads (hence why they are such a big threat to old media companies); and Microsoft with the most diversified revenue streams (across software/Windows/MS Office products, hardware Surface/Xbox and ads.

Well if you own the listed investment iShares S&P 500 ETF (Ticker: IVV) you already do and you already benefit from their great performance in recent times. The name of this investment doesn’t really do it justice, it really is just investing in the 500 biggest listed companies in the USA.

If you look at the below graph we created, it shows the biggest 20 companies among those 500 companies. If you look carefully you’ll notice all 5 of the Big 5 IT compaies are included! Every single one! And if you add the two Alphabets together (see Interesting aside 2 below) all five are included in the Top 10 biggest listed companies in the USA.

So to answer the question ‘Should I invest in IT?’ the answer is yes and you already do! 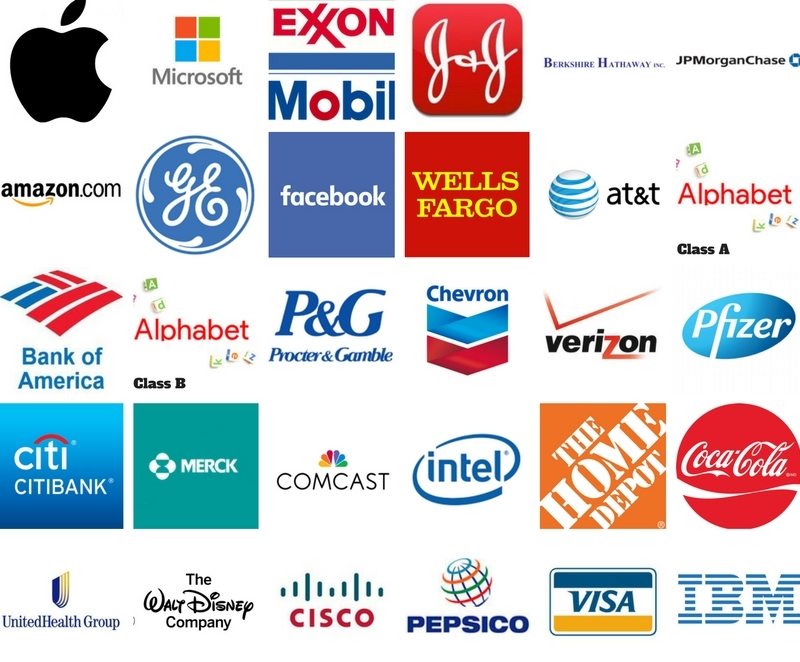 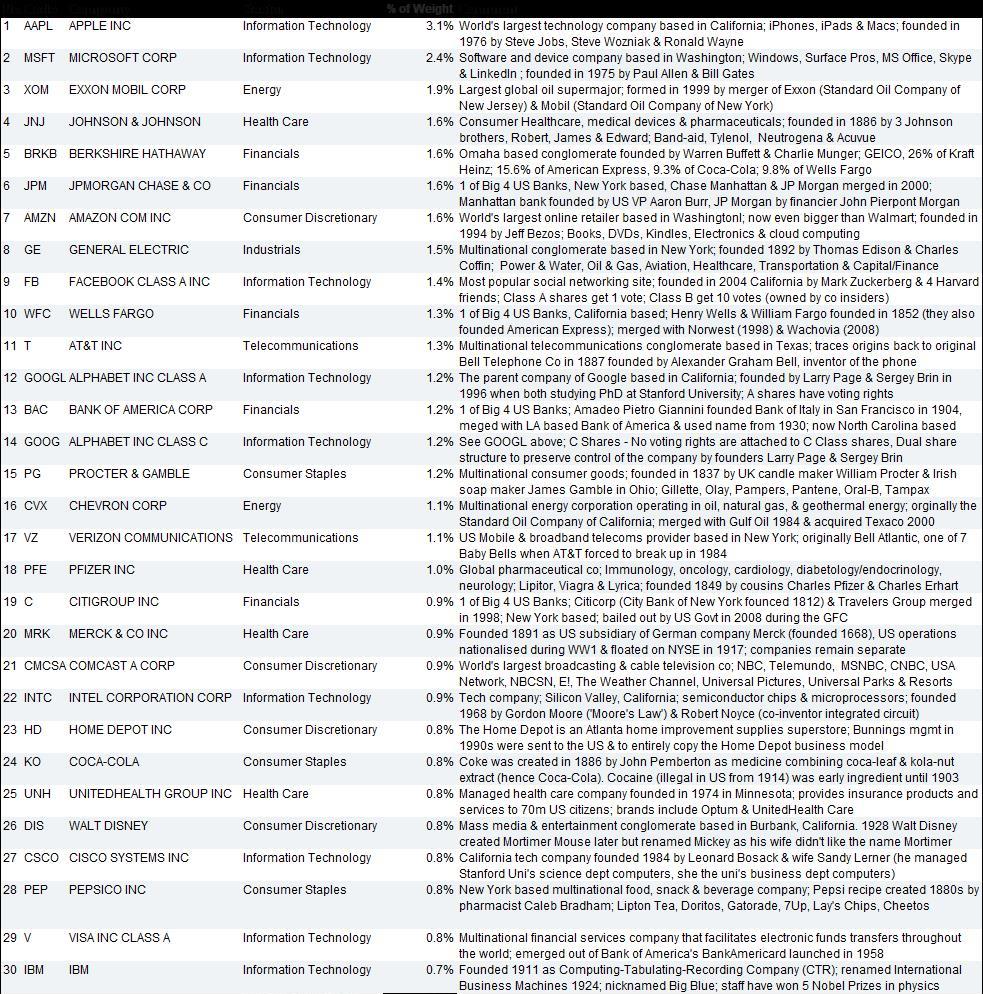 Interesting aside 1: What are the Chinese equivalents to the Big 5?

Behind the Great Firewall of China, there are 5 big IT companies that you’ve likely never heard of that are also dominating their massive market, the biggest in the world.

Baidu, the Chinese equivalent to Google, holds an 80% market share for internet searches after Google exited this market, so remember that name!

Founded by the charismatic entrepreneur Jack Ma, Alibaba is the Chinese equivalent to Amazon and has its Taobao e-commerce business (also Tmall, and Alipay). Alibaba is like Amazon, Yahoo and Ebay all rolled into one.

If you have a Facebook account here in Australia then in China you’d have a Tencent account. And we’d all communicate with each other via Tencent’s WeChat app, one of the world’s most popular apps (630 million people use it each month).

Xiaomi is the Chinese equivalent to Apple. It manufactures customer centric smartphones but at a much lower price than Apple. It has no stores (unlike Apple) and does no traditional advertising (again unlike Apple). Interestingly, instead it relies on social media and word of mouth to sell its smartphones. Xiaomi is also a leader in IoT (again, remember that term – Internet of Things!)

If you’ve heard of one of the Big 5 Chinese IT companies then it’s probably Lenovo. Lenovo is equivalent to Samsung with its focus on manufacturing similar hardware to the giant Korean IT company. You may have heard of Lenovo because it bought IBM’s Thinkpad (laptop) business and Motorola.

Interesting aside 2: Why is Google called Alphabet and why are their two Alphabets listed in the USA?

In 2011 Google made a big announcement – it turned itself into a subsidiary of a new holding company called Alphabet (with a pretty cool web address – www.abc.xyz). Google’s co-founder Larry Page explained the move thus:

“We liked the name Alphabet because it means a collection of letters that represent language, one of humanity’s most important innovations, and is the core of how we index with Google search! We also like that it means alpha‑bet (Alpha is investment return above benchmark), which we strive for!”

The aim was for each company within the new structure to have independence to develop their own brand under a different letter. For instance, G is for Google (including the search engine, Youtube and Android operating system for phones). N is for Nest, the business that develops smart thermostats and other smart home devices.

The two listed Alphabet companies are GOOGL and GOOG. There’s actually very little price difference between the two – at time of writing GOOGL traded at a slight premium  – $960.01 versus $940.49 for GOOG. GOOGL are the Class A shares, GOOG are the class C shares. Where are the Class B shares? I hear you say. Good question. The Class B shares are not publicly traded but instead are closely held by Sergey Brin and Larry Page (co-founders), Eric Schmidt (Executive Chairman) and a few other directors. This structure enables them to retain effective control of the giant company.

The main difference between A shares (GOOGL) and C shares (GOOG) is A shares get one vote each and C shares get none. So that’s why the A shares trade a premium (I just know you were asking that question!) B shares get 10 votes(!) so B class shareholders end up controlling 64% of the votes. That’s how they can still control the company.