In 2017 the Australian newspaper and the US financial magazine Barron’s published the pre-eminent list of Australia’s top 50 financial advisors.

Quantum Financial is incredibly proud that it is the only independent financial planning firm in Australia to have two financial planners listed – both Claire Mackay and Tim Mackay. 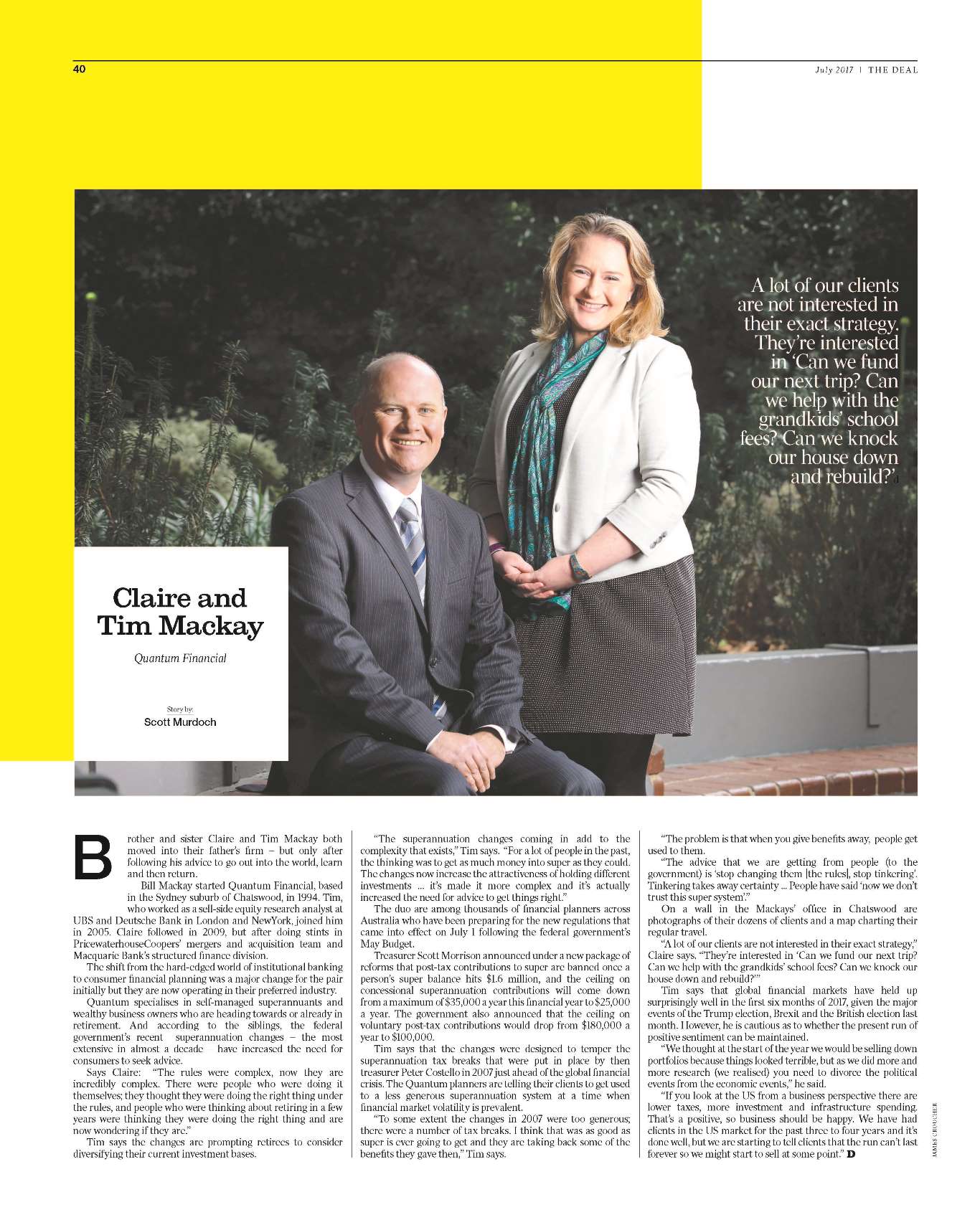 According to The Australian “Brother and sister Tim and Claire Mackay are well known as the next generation of Mackays in Quantum Financial, founded by their father Bill in Sydney in the 1960s. The siblings are active influencers on LinkedIn and other social media.”

According to Claire “The recognition of such pre-eminent national awards gives our clients the confidence that the investing and financial planning advice they receive is industry leading.”

According to Tim “Existing and potential clients have confidence that their trusted Quantum Financial advisor provides excellence in best practice advice as judged by their peers. When we are recognised as elite experts in the field of financial planning, our clients start even more conversations with us on deeper aspects of their financial lives.”

Of the 50 advisors included in the list, The Australian and Barron’s provided a detailed profile of 9 of the top advisors, and Claire Mackay and Tim Mackay were included in this list. Links to the online articles are here:

We were also honoured to receive the below lovely congratulatory letter from our local member, the Federal Minister for Urban Infrastructure, Paul Fletcher.

We reproduce Barron Magazine’s article below:

Brother and sister Claire and Tim Mackay (of Quantum Financial) both moved into their father’s firm – but only after following his advice to go out into the world, learn and then return.

Bill Mackay started Quantum Financial, based in the Sydney suburb of Chatswood, in 1994. Tim, who worked as a sell-side equity research analyst at UBS and Deutsche Bank in London and New York, joined him in 2005. Claire followed in 2009, but after doing stints in PricewaterhouseCoopers’ mergers and acquisition team and Macquarie Bank’s structured finance division.

The shift from the hard-edged world of institutional banking to consumer financial planning was a major change for the pair initially but they are now operating in their preferred industry.

Quantum specialises in self-managed superannuants and wealthy business owners who are heading towards or already in retirement. And according to the siblings, the federal government’s recent superannuation changes – the most extensive in almost a decade – have increased the need for consumers to seek advice.

“The superannuation changes coming in add to the complexity that exists,” Tim says. “For a lot of people in the past, the thinking was to get as much money into super as they could. The changes now increase the attractiveness of holding different investments … it’s made it more complex and it’s actually increased the need for advice to get things right.”

The duo are among thousands of financial planners across Australia who have been preparing for the new regulations that came into effect on July 1 following the federal government’s May Budget.

Tim says that the changes were designed to temper the superannuation tax breaks that were put in place by then treasurer Peter Costello in 2007 just ahead of the global financial crisis. The Quantum planners are telling their clients to get used to a less generous superannuation system at a time when financial market volatility is prevalent.

“To some extent the changes in 2007 were too generous; there were a number of tax breaks. I think that was as good as super is ever going to get and they are taking back some of the benefits they gave then,” Tim says.

“The problem is that when you give benefits away, people get used to them.

“The advice that we are getting from people (to the government) is ‘stop changing them [the rules], stop tinkering’. Tinkering takes away certainty … People have said ‘now we don’t trust this super system’.”

On a wall in the Mackays’ office in Chatswood are photographs of their dozens of clients and a map charting their regular travel.

“A lot of our clients are not interested in their exact strategy,” Claire says. “They’re interested in ‘Can we fund our next trip? Can we help with the grandkids’ school fees? Can we knock our house down and rebuild?’”

Tim says that global financial markets have held up surprisingly well in the first six months of 2017, given the major events of the Trump election, Brexit and the British election last year. However, he is cautious as to whether the present run of positive sentiment can be maintained.

“We thought at the start of the year we would be selling down portfolios because things looked terrible, but as we did more and more research we realised you need to divorce the political events from the economic events,” he said.

“If you look at the US from a business perspective there are lower taxes, more investment and infrastructure spending. That’s a positive, so business should be happy. We have had clients in the US market for the past three to four years and it’s done well, but we are starting to tell clients that the run can’t last forever so we might start to sell at some point.” 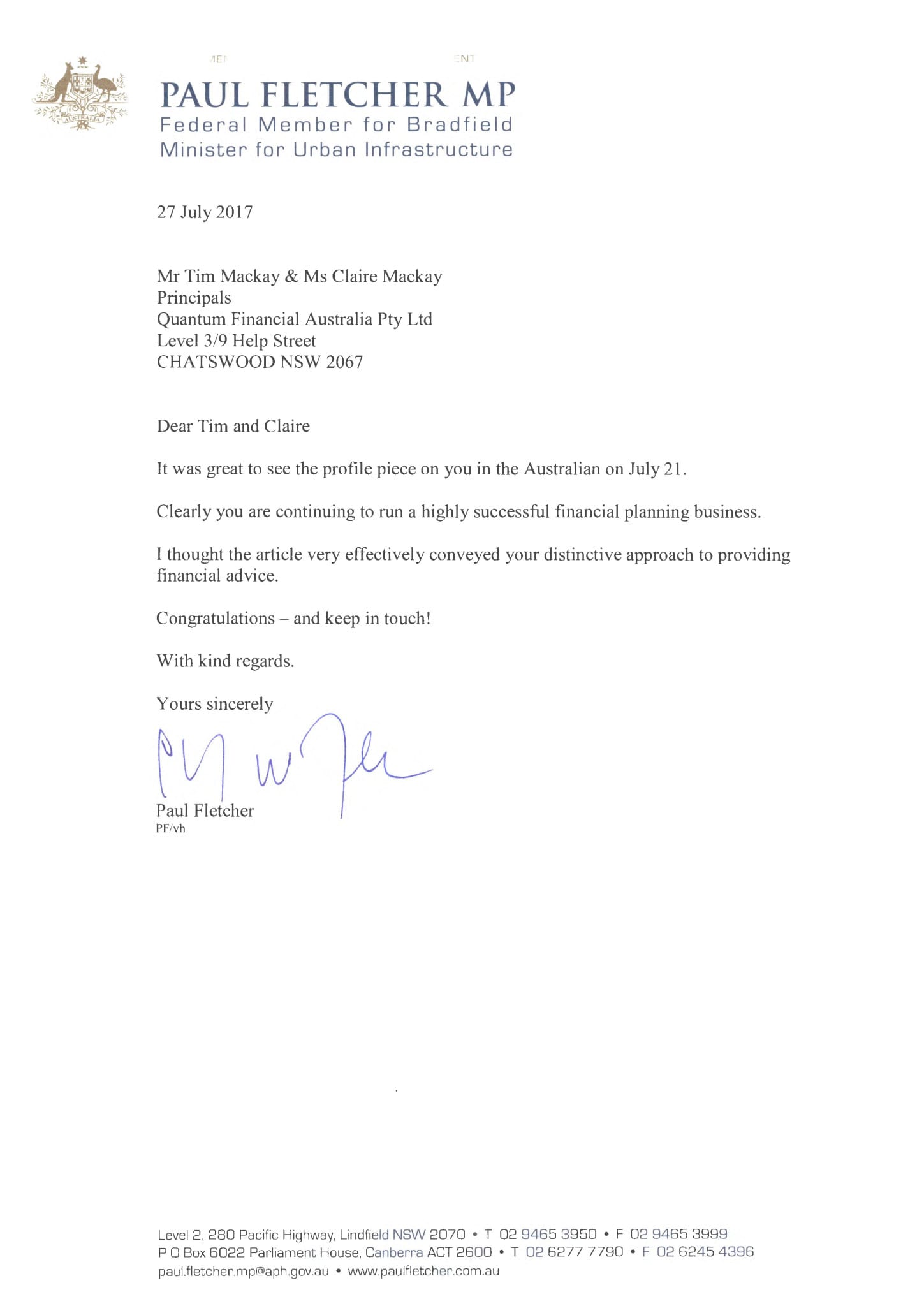 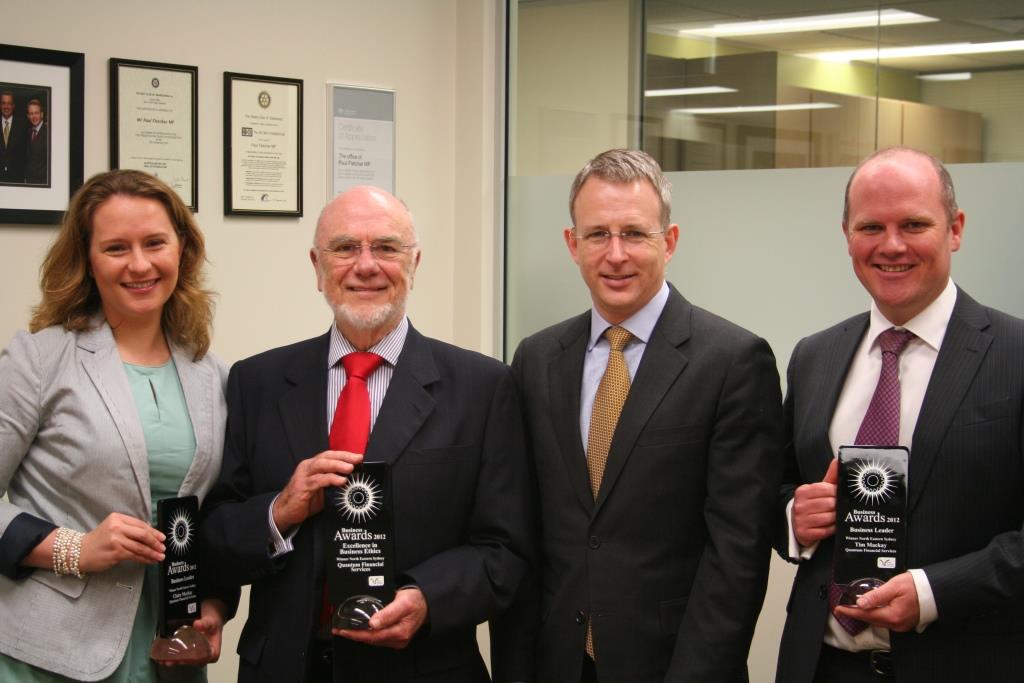